Not far from our office at the Milwaukee/Halsted intersection there use to be this billboard for Skyy Infusion All Natural Ginger vodka. The ad shows a glamorous redhead woman lying in sheets of satin (nudity implied) with a tag line that says “Go Natural”. Being in the strategy and communications field naturally I have a few thoughts on this ad.\n\n 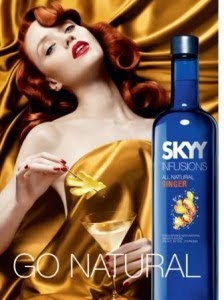 \n\nAs you know from my MakersMark post, I always pay attention to billboards. When I first saw this ad the first thing that came to my mind was “There is nothing natural about this picture.” I can see where Skyy vodka made their mistake. I am assuming they thought to themselves cocktails are very sleek and upscale. I’m sure they wanted a person who embodied those characteristics and being ginger-infused vodka using a “ginger” model only makes sense. I mean after all when you think of a glamorous red head the first person in everyone’s mind is the Gilligan’s island character Ginger; it seems like a no-brainer. The problem is there is a disconnect between the messaging and the image. Yes Ginger was a glamorous character but she was also incredibly superficial.\n\nI feel the smarter solution would have been to capitalize on the natural/organic/eco green wave everyone is riding right now. I would’ve created something more along the lines of having a more carefree yet still elegant looking red head model in evening wear that was made of leaves. I mean what better way to merge classy elegance with all natural than take the little black dress and turn it into a little green gown. A solution more along these lines would have:\n\n1. Connected the tagline to the image\n2. Kept the integrity of the brand while still incorporating the current natural and eco friendly trend.\n\nWhen an idea is consistently communicated (verbally AND visually) you have a better chance of getting your message across.